This gaming studio was launched in Sweden in 2012. Right from the start, the developers set an exact goal for themselves: to create video slots that would be different from other ones in terms of both design and gameplay. After several years in this business, the popularity among operators and gamblers is the evidence that the studio has succeeded in the originally predefined area. Despite a quite limited number of slots and a single office, Thunderkick products are currently used all over the world.

The provider delivers exclusively Thunderkick online slots offering no table games or games with a live dealer. All the games are based on HTML 5, so they run seamlessly both in PC browsers and on any type of mobile device.

Since its incorporation in 2012, the studio have been positioning itself as an unconventional developer. The primary attention was paid to the story component of the slots because most providers overlook this aspect. That being said, when creating its games, the company uses a non-standard approach: it comes up with a setting and story first and only then proceeds to developing a gameplay based on them. It is story games that are in the highest demand in many online casinos with Thunderkick. The fact that spinning of the reels and the appearance of pay lines are considered as secondary aspects by the provider, while the priority is story and concept, makes games by this studio unique.

High-quality 3D graphics and custom music are other aspects the provider pays much attention to in its games. Some slots were designed in a humorous and ironic style. Thanks to using the HTML 5 technology, all the games can be played from any tablet, smartphone or PC. Built-in automatic adaptation to a screen size and aspect ratio is available.

One of the main characteristic features of the developer is an innovative, non-standard gameplay of its games. For example, some slots use absolutely uncommon play fields instead of classic lines and reels. For example, each spin is made by simply mixing the symbols available on the table. You cannot find this kind of gameplay elsewhere.

The rule of thumb observed by the provider is not to reproduce games or game elements from other developers. This is why only a dozen games maximum are released each year, which, however, can boast top-notch implementation. In all online casinos with the Thunderkick provider, the company’s slots use the Remote Gaming Server system. This means that the entire game process takes place on secure servers, which results in better performance and responsiveness as compared to other slots.

You can play slots by Thunderkick only in licensed casinos with Thunderkick software. The studio has gambling licensed in Malta, Gibraltar, Sweden and the United Kingdom. Also, they have iTech Labs and BMM TestLabs certificates. For transmitting data from a player to the server, 128-bit SSL encryption is used, which completely eliminates any risks of data or money loss.

The company is headquartered in Sweden. The staff is 30 persons maximum. The studio’s games were translated into 19 languages and support all world currencies. The developer’s products are available in such renowned casinos as 888, bet 365, betclic, Betsson, UniBet, Wildz Casino and others.

The major features of this gaming studio include:

In its games, the provider pays much attention to a story. For example, the setting of a Mexican festival of all the dead, or adventures of a berserker barbarian in the modern world. There are a couple of classic slots, such as Fruit Wrap. However, the only thing that is conventional in this slot is the fruit theme. In every other aspect, this is another specimen of an uncommon slot by the developer. There are no lines or reels; each spin is made by throwing fruits onto the screen, while their number, location and “the grid” are different each time.

The mechanics types the provider uses in its slots include bonus rounds, free spins and a variety of special symbols. There are no risk games, which allow you to multiply or lose a winning spin. There are also several slots offering a progressive jackpot, which is why Thunderkick slots encourage gamblers to bet money more than ordinary ones. For those who would like to evaluate a game and its gameplay first, slots by Thunderkick have an incorporated demo mode in place. You can also play demo on the manufacturer’s official website.

The most popular slots by this developer: Esqueleto Explosivo, Birds On A Wire, 1429 Uncharted Seas, Babushkas, Børk the Berzerker Hack ‘N’ Slash Edition.

Here is a screenshot of Full Moon Romance, one of the company’s latest games:

The atmosphere of an outdoor cinema and late evening with your beloved girl can be felt from the very first spins. This is one of the company’s slots with almost a standard gameplay.

Thunderkick is a small provider yet with impressive weight in the gambling industry. According to many gamblers, this developer is the most original of all. 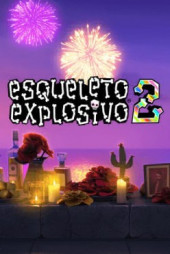